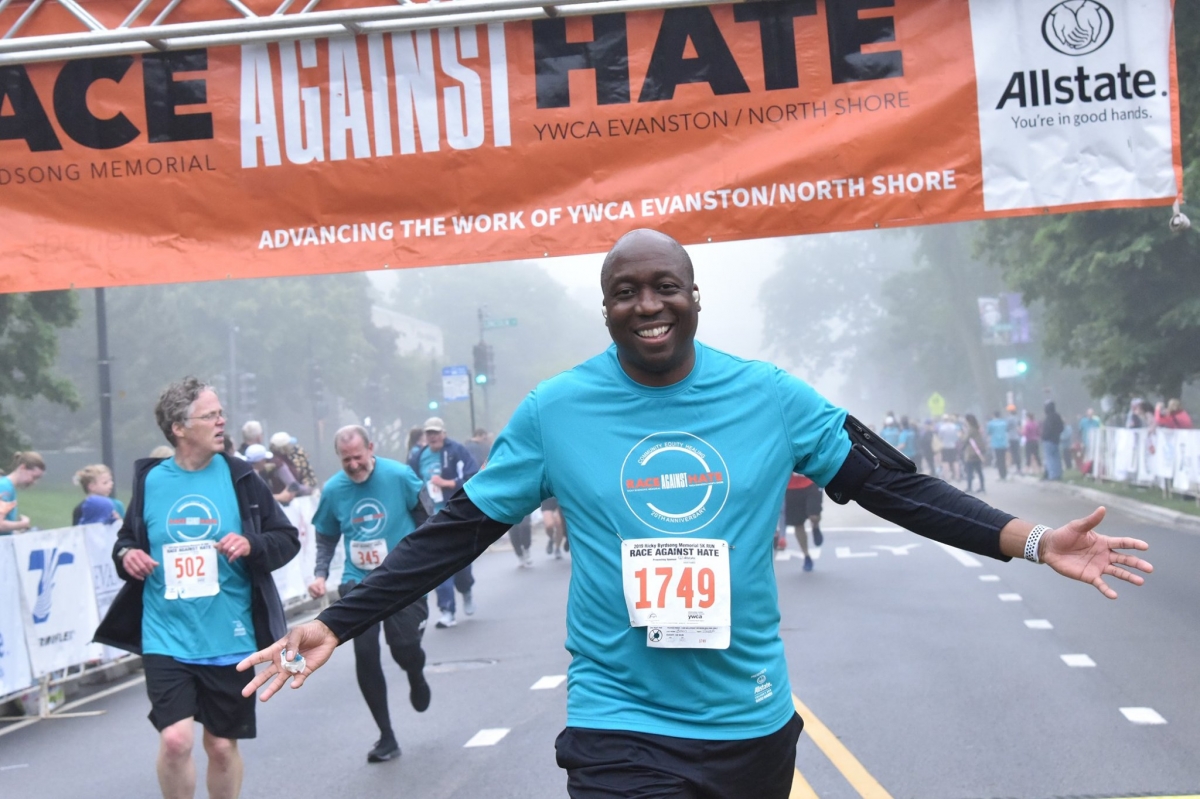 The 23rd annual Ricky Byrdsong Memorial Race Against Hate, presented by YWCA Evanston/North Shore (YWCA E/NS), will be held at Northwestern University’s Long Field on June 19, for the first time since 2019 due to Covid-related restrictions. The race, which consists of a 10k run, 5k run and walk, and youth mile, was canceled in 2020 and a modified “race in place” version was held in 2021 to recognize the intent of this critical community event.

The Race Against Hate is one of the largest events of its kind in the United States and is held every year on Father’s Day to honor the legacy of Ricky Byrdsong, former Northwestern University men’s basketball coach and vice president of community affairs at Aon Corporation. This year’s event also falls on Juneteenth, the celebration of the emancipation of slaves, which was signed into law as an official federal holiday in 2021 by President Biden.

“This gathering of people from all over the city and across the country is extremely significant at this moment in time for many reasons,” said YWCA E/NS CEO Karen Singer. “For over two decades now, we have come together to take a public stand and raise funds to ensure the continued and deepened impact of YWCA’s ongoing equity work. As a community, we must continue to work to prevent the tragic loss of lives and extremist hate-fueled violence. Hate crimes in the U.S. are on the rise, and it is imperative that we leverage the momentum of this event in the post-George Floyd world as we fight for justice, equity, and an end to racism.”

Ricky Byrdsong’s family and friends launched the Race Against Hate in 2000, just one year after his tragic murder by a white supremacist while walking in his Skokie neighborhood with two of his young children. The shooter also wounded seven others and killed a Korean American graduate student in Indiana before taking his own life. The Race Against Hate was entrusted to YWCA E/NS by the Byrdsong family in 2007 to honor Ricky’s legacy and bring attention to the need to combat hatred in all its forms. All proceeds from the race go toward YWCA E/NS’s work to promote racial justice and prevent violence, specifically through its Equity Institute and Violence Prevention programs.

“When we first started, we had no idea that with every passing year this event would become increasingly relevant and that hate in all its evil forms would be commonplace,” said Sherilyn Byrdsong, Ricky’s widow. “This race is so relevant because our nation is really grappling with how to deal with increasing hate crimes. It provides a great way for families to teach their children about love, acceptance, and understanding, and it sends a message to the nation that love trumps hate every time. I challenge every participant to identify at least one thing, besides participating in the Race Against Hate, that they can do to make our nation a safer place for all Americans. Someone’s life may depend on it.”

YWCA’s Equity Institute, the organization’s arm dedicated to promoting racial equity at all levels, is hosting a panel discussion on June 16 at the YWCA’s newly renovated and expanded campus which will also be streamed live for virtual participation. Titled “The Harm of Inaction: We Can’t Wait,” the panel discussion will feature a conversation between Sherialyn Byrdsong and advocacy experts Sarita Smith (manager of student assignments at Evanston/Skokie School District 65) and Josefina Alvarez, Ph.D. (professor emerita at Adler University). The conversation will be moderated by Equity Institute Director, Tiffany McDowell, Ph.D. Event details and the link to register for in-person or virtual attendance can be found at https://harmofinaction.eventbrite.com.

Thermoflex is the presenting sponsor of this year’s race and over 60 local businesses, schools, faith, and civic organizations are also supporting the event.

Individuals and teams can register online for the race at https://p2p.onecause.com/rah2022 until midnight on June 13 or on race day in person at Floyd Long Field in Evanston on the Northwestern campus starting at 6:30 a.m.